Jill Evans is a Welsh politician of the Plaid Cymru party, who has worked tirelessly to further the goal of language equality in Europe. During her time as a member of the European Parliament from 1999-2020, she was the first person to use the Welsh language in parliamentary debate and wrote the report “Language Equality in the Digital Age”, which laid the groundwork for the ELE project as a whole. 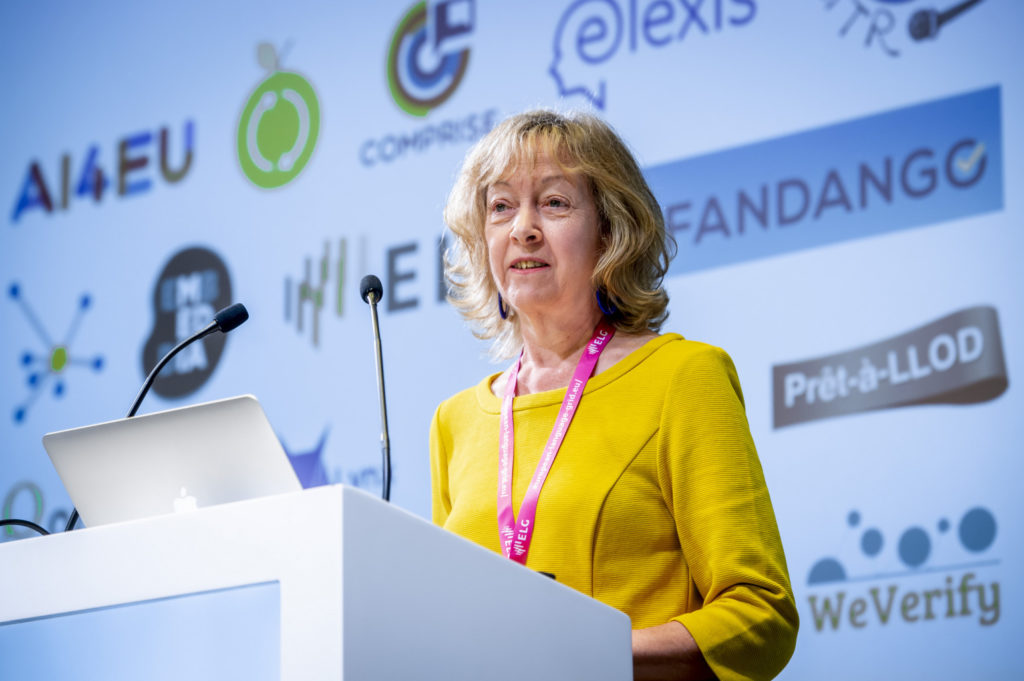 Can you please tell us a bit about yourself: What work have you done and are you currently doing in regards to the Welsh language?

I was born in the Rhondda Valley in 1959. I attended my local primary school which was an English language school. Given the more recent expansion of Welsh medium education, I am delighted that the school is now a Welsh language school. I went to Tonypandy Grammar School which was also English language, but I had inspirational Welsh teachers to whom I owe my fluency in Welsh today. I gained a degree in Welsh at Aberystwyth University and was later awarded a Master of Philosophy degree for my work in developing an ‘O’ level examination for adults learning Welsh as a second language. I have always been active in politics and in the peace movement. In 1999 I was elected to the European Parliament as a Plaid Cymru MEP representing Wales. I was subsequently re-elected for four terms until 2020, when the UK left the European Union, much against my will. I have retired from elected politics, but I am the Plaid Cymru Director of International Affairs, Chair of the Wales Campaign for Nuclear Disarmament and a board member of the recently established Academi Heddwch, Wales’s peace institute.

What is your involvement with the European Language Equality project?

I was very grateful to the experts and now partners of the European Language Equality project for the invaluable assistance on my report on language equality, as well as for all that they have done in highlighting the huge potential for the development of language technologies in Europe.

From your perspective, how has the situation of the Welsh language developed over the last years and how do you view these developments?

Sixty years ago this month, Saunders Lewis gave a famous lecture entitled “The Fate of the Language” that called for urgent action and led to the establishment of the Welsh Language Society, Cymdeithas yr Iaith Gymraeg to campaign for the future of the language. The current Welsh Government has adopted an ambitious target of one million Welsh speakers by 2050 which is widely supported but also dependent on action in many other areas of policy, such as housing, employment and sustainable communities. It has also announced free Welsh lessons for all 16- to 25-year-olds from September, as well as for teachers, head teachers and teaching assistants and an e-learning resource pilot project for 16- to 18-year-olds in school, college or on an apprenticeship scheme. It is “…a small but crucial contribution in our efforts to expand Welsh language citizenship to everyone”. Wales is unique in having a Wellbeing of Future Generations Act that requires all public bodies to consider the social, economic, environmental and cultural well-being of the nation. Its digital service standards include meeting the needs of people who use the Welsh language in their everyday lives and providing services that promote and facilitate the Welsh language.

You were the first person to use Welsh in a debate in the European Parliament. What was this experience like?

I campaigned consistently for the Welsh language to become an official EU language, as it is an official language in Wales. When I was first elected, only the EU official languages were allowed to be spoken in the parliament chamber. We succeeded in changing that rule to allow other languages to be spoken but without interpretation. We won co-official status for Welsh following similar recognition of the Spanish state languages, but it was still far from the equality we sought. When Tony Blair came to Brussels to address the European Parliament during the UK presidency, it was too good an opportunity to miss, so I made part of my speech in Welsh and my microphone was not turned off! It attracted a lot of press coverage. A nice footnote to an otherwise very sad end to my time as an MEP is that I spoke Welsh again in my final speech and although there was no interpretation, the translation unit contacted me the next morning for a transcript and translation so they could include my whole speech on record.

Do you consider Welsh to be well-represented in the digital world?

The development of new technologies gives us an unprecedented opportunity to ensure true equality between languages. The Welsh Government has adopted a Welsh Language Technology Action Plan with the key aim of developing artificial intelligence to enable machines to understand spoken Welsh. Improving computer assisted translation is also an important element. I supported the government’s initiative which has meant that the excellent work done by Canolfan Bedwyr in Bangor University, for example can be supported and promoted. In the online world, English continues to dominate but given adequate resources and policies and working with ELE we can redress the balance.

What does Digital Language Equality mean to you and what could it mean for the Welsh language?

Digital language equality means that speakers of all languages, including minority and endangered languages, have the same access to digital resources as speakers of dominant languages. For Welsh, this means achieving true equality with English, in particular in the online world. This will have a particular impact on children who tend to spend more time in the digital world and could help accelerate a shift in the “real world”.

What do you think needs to be done for a language to be considered equal to others in a digitized society?

People of all communities should have equal access to digital tools. The first step in achieving that is the ELE project looking at the language technology support of different languages and on this basis developing a strategic agenda and a roadmap towards equality. It is this research and targeting that will enable all languages to flourish in the digital age, given the right support.

What do you consider the main differences between supporting a language offline or online?

I believe that providing support for languages online has enormous potential in terms of accessibility to tools and resources but also in achieving and confirming equal status for all languages, which is a very important principle. In an increasingly globalised world, that means that all languages, whatever the number of speakers and whether official or unofficial, can take their place side by side.

In 2018 you wrote a report for the EU commission titled “Language Equality in the Digital Age”, which is the basis for the ELE project. What motivated you the most about this work and what changes have you observed since then?

When I first proposed a report on language equality in the digital age to the European Parliament’s Culture and Education Committee it provoked huge interest, both there and in the Industry Committee. That was, I believe, for two reasons: the first was that there is digital language inequality in Europe, even for some of the EU official languages; secondly, that this was important for all those interested in EU competitiveness in the digital industries. The idea for the report had come from the STOA study (the EU research body) which showed the social and economic consequences of language barriers and the widening of the technological gap. As someone who had long campaigned for the Welsh language, I could identify with the problems but also recognise the potential of a major EU project in this field. During the course of the drafting of the report I learned a great deal from the many organisations campaigning for language rights and from those engaged in the ground-breaking work in developing the technologies. I am proud that the overwhelming vote in favour of my report in the European Parliament helped the Commission in establishing the language equality project and supporting the exciting work that is taking place now.

Is there a digital Welsh language tool or application that you enjoy using?

As someone who does a lot of writing in Welsh, I really appreciate free software like Cysgliad with a spell checker and dictionary. I am always delighted to see new made in Wales developments which strengthen linguistic diversity.